Competence in consulting is a given - but how do you measure it? Does 25 years of experience as a Microsoft partner say anything about competence? Perhaps.

Many software and technology certifications that our consultants have regularly completed or renewed over these years? More likely.

The continuous awards from Microsoft as a Premium or Gold Partner in various fields of competence? Definitely.

Episodes of a long partnership

In February 1997, we received our first  certificate of appointment as a Microsoft Partner. The fact that we are still “part of it" a quarter of a century later was certainly not thought possible at the time. We take this anniversary as an opportunity to review some episodes of this long partnership:

#9 Site Server, SharePoint: It all started with Site Server and Tahoe (1996). Back then, Jeff Teper and his team started development under the premise of "bringing search, documents, Office and the web together." Then, with the release of Microsoft Office SharePoint Server 2007, Microsoft laid the foundation for today's major releases, SharePoint Server 2019 and SharePoint Online. Starting in the mid-2010s, we helped numerous companies adopt this technology, designing and deploying countless SharePoint-based solutions. This expertise did not escape Microsoft's attention at the time, and so we formulated considerable quantities of so-called "one-pagers" - special marketing documents that Microsoft then used for internal and external promotional activities. Here are representative examples from this time:

#8 Cologne Branch: For about five years, we maintained an office of about 200sqm in the Microsoft Campus at Cologne's Rheinauhafen. When Microsoft moved from Neuss to Cologne in 2008, the enthusiasm was great: there was talk of a "Silicon Valley Light" in Cologne. Around its hip building called RheinauArtOffice, Microsoft originally wanted to build a partner campus with a total of 40,000sqm. Unfortunately, the idea didn't work out, the campus was never realized and out of twelve partner companies in the RheinauArtOffice only a few are left - our move out went through in 2012:

#7 Digital Pharma: ... was an initiative by Microsoft to "improve operations and decision making across the pharmaceutical value chain." An elementary part of this were conferences with presentations on reference solutions, intended to inspire other companies to implement their own ideas. We were very involved in this initiative for five years. In 2009, for example, we presented the project "Enterprise-wide implementation of Microsoft Office SharePoint Server - MOSS" together with our customer Sanofi-Aventis:

#6 CeBIT 2006: Cebit was one of the world's largest IT trade shows and was held annually at the Hannover exhibition center from 1986 to 2018. The Microsoft booth was always designed as a joint booth where interested partners could also present themselves. INOSOFT has participated for a total of eleven consecutive years. The best and most successful performance by far was in 2006: With an extended booth concept, partners were integrated into Microsoft's presentations with their solutions for the first time.

#5 World's Best Partner Solution Award (2003): In 2003 INOSOFT was awarded the prize for the best software solution worldwide by Microsoft. The "Microsoft Award" is presented during the annual partner conference. The jury is composed of an advisory board, independent experts, Microsoft executives and members of the press. In the selection process, the technological innovation as well as the increase in efficiency of the solution in daily operations were evaluated.

#4 Windows Server 2003 : 2003 was the great time of Brian Valentine (Microsoft Senior Vice President). Because of his success with Exchange, Valentine took over the Windows 2000 project in 1998, which was on the brink of failure, and he successfully delivered Windows 2000 within a year. He then led the teams responsible for Windows XP, Windows Server 2003 and Windows Vista. Due to our connection with Aventis (formerly Hoechst, now Sanofi) and our partner status, we had the privilege of attending a global team meeting with Brian Valentine in Seattle in March 2003:

#3 Commercial on n-tv (2000): The Y2K bug was a computer problem caused by treating year dates as two-digit numbers. Before the millennium change, we developed a special application for Deutsche Bank to centrally record and manage the Y2K problems for about 5,000 software systems. The project was extremely successful and attracted the attention of Microsoft: without further ado, they financed a commercial for the Microsoft Solution Provider Partner from Marburg, which was then broadcast for several weeks on n-tv, among others:

#2 Solution Provider Forum (1999): As an upgrade from Microsoft Mail 3.5, Microsoft introduced Exchange Server 4.0 in 1996 - a completely new X.400-based client-server mail system based on a "real" database. At that time, we were already supporting a number of quite large MS Mail environments, so we were more than thrilled when an employee of Microsoft's Bad Homburg office handed us the CDs with an Exchange beta version. And what a surprise when it turned out how well the beta version already worked. In 1999, the first Microsoft Solution Provider Forums were held and we were able to report to the assembled customers about our experiences in using and migrating to MS Exchange Server 4.0: 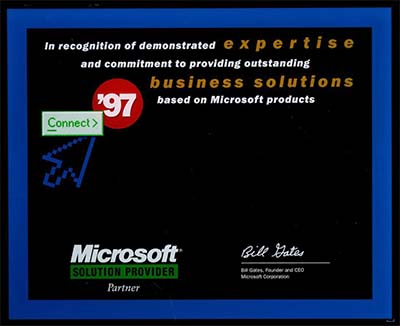 Then, as now, interested system houses had to apply for this award and prove their competence in Microsoft technologies: "In recognition of demonstrated expertise and commitment to providing outstanding business solutions based on Microsoft products".

Our first certificate of appointment was signed by a gentleman named Bill Gates.